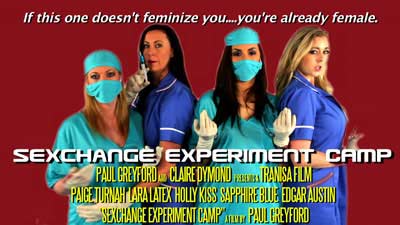 Synopsis :Eddie secretly visits adult clubs without his wife's knowledge but this new club is a little different and he soon finds himself in an operating theatre having breast implants fitted by the domineering woman that run the club and hospital. On waking he is dressed and transformed into a woman. Tranisa's most elaborate film so far. Here is the trailer...enjoy.

When Eddie enters the club he is blissfully unaware that the club is only a front, a front for an organization that thrives on turning men into women.

The women in the club are in no way there to serve him submissively. They are in fact the masters of this scene, skillful doctors and business people knowing exactly what it takes to turn a fool of a man into a beautiful woman.

Yes, this is a movie that first and foremost caters to crossdressers, but the surgery brings the whole story up to another level.

Like most Tranisa videos, this is just entertainment. Their stories aim at setting the stage for further fantasies. But I like it, and most of all do I like the wonderful British humor that permeates the whole 30 minutes.

South Africa's apartheid army forced white lesbian and gay soldiers to undergo 'sex-change' operations in the 1970's and the 1980's, and submitted many to chemical castration, electric shock, and other unethical medical experiments. Although the exact number is not known, former apartheid army surgeons estimate that as many as 900 forced 'sexual reassignment' operations may have been performed between 1971 and 1989 at military hospitals, as part of a top-secret program to root out homosexuality from the service. Although several cases of lesbian soldiers abused have been documented so far—including one botched sex-change operation—most of the victims appear to have been young, 16 to 24-year-old white males drafted into the apartheid army. Between 1967 and 1991, all white males over the age of 16 were conscripted in South Africa. The apartheid regime, which began in 1948, officially ended in 1994.